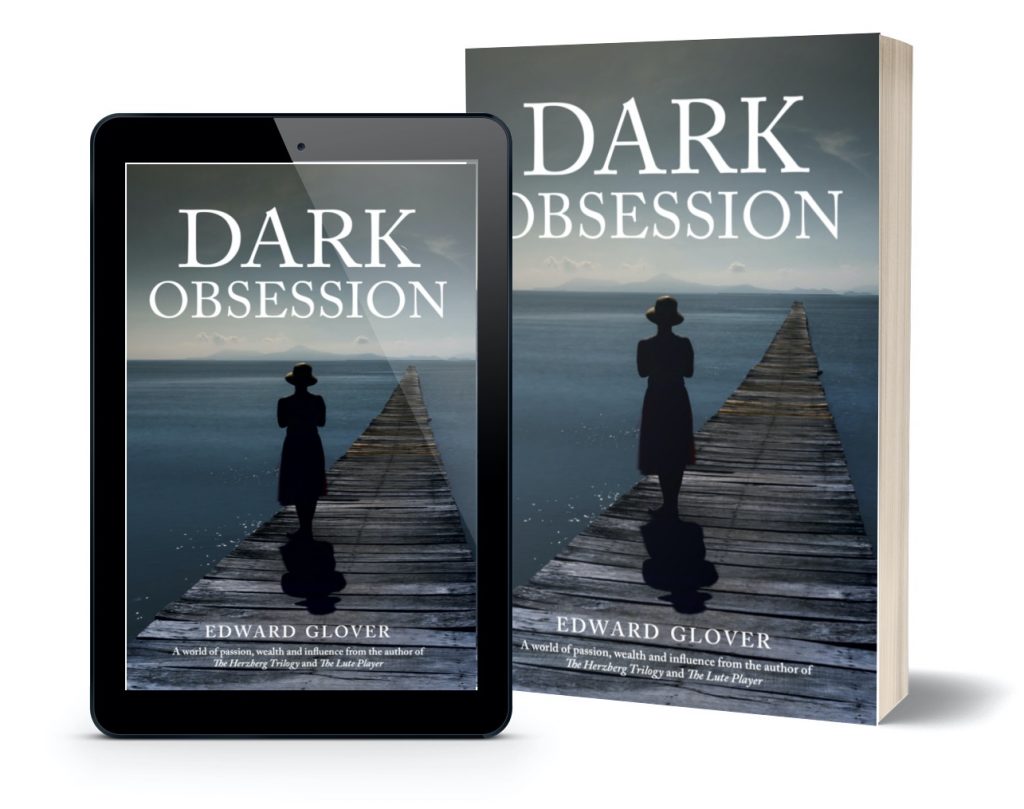 The story behind Dark Obsession

It began so simply, on a liquid sun-steeped day – late afternoon, I recall – in the family’s summer residence by the river. I got up from the piano, where I’d been playing a Chopin sonata, to stand in the open veranda doorway. The trees on the far bank and those on the hillside beyond were cloaked in an undulating deep-gold lucent light. An occasional warm breeze brushed the lace curtains. There was no sound in the sultry laziness of the approaching evening. Then I saw her. She sat beneath a parasol in a skiff moving effortlessly along the river, her hand trailing in the water. Her female companion was rowing, her featherlike strokes barely rippling the surface. The boat – vermilion orange in the sunlight – was vivid against the cobalt blue of reflected sky, the sunshine seeming to dissolve the line between hull and water, causing a shimmering interlacing of colours.

Picking up a knife close to her paint palette on the nearby table, she moved towards me, cursing me for what I had done and ordering me to leave at once. I seized the knife and in anger plunged it into the side of her neck. She fell to the floor, blood seeping from her wound. I bent over her to feel her pulse. She suddenly stirred and sought to grab me by the throat, croaking the word “Bastard”.

Approaching the bed, she put a finger to her lips. I pulled the covers back and gestured. Putting the candle down and shedding her nightdress, she slipped in beside me, undoing my nightgown and releasing the ribbon that held back my hair. Naked, we lay together. She stroked my skin, my hair, kissed me and held me tight. I had no urge to stop her. I wondered if being caressed by a man would be as enjoyable and comforting as the pleasure to which I had surrendered. Not letting go of me, she fell asleep. I was locked in her arms, whose grip I had no wish to loosen.

She passed me a small sheet of innocuous-looking paper – the kind used for personal correspondence – with bold black ink handwriting on it. I read the chilling words.
You cannot possess what belongs to someone else.

We walked onto the veranda and down the steps to the scented garden, with lanterns hanging from the trees and, in the distance, the sound of gentle, bewitching music from the imperial court. As we strolled the fragrant pathways, I was sure the ambience that evening beneath the stars had been summoned by the divine deity to allow me to weave my magic. I would not fail.

As I turned to follow him, I noticed a sheet of paper on the floor near his desk. I picked it up.
“Here, Émile, you dropped this.”
He lunged at me, fury on his face. For the second or two the paper was in my hand, I saw from the heading it was a telegram from Paris. A chill snaked down my spine.

It has been written in my lifetime that no human authority – neither the King nor the Minister of Justice nor indeed the Prime Minister – can intrude on the power of the juge d’instruction, no one can stop him, no one give him orders. He is sovereign, obeying only his conscience and the law.
I agree with those words of Monsieur de Balzac. As I sit at my desk in the spring of 1878, I am supreme. In my hands, in what I write and utter, I hold the fate of others. But that mantle of supremacy brings an all-too-human burden.