[Announcement] The King Who Ate My Breakfast 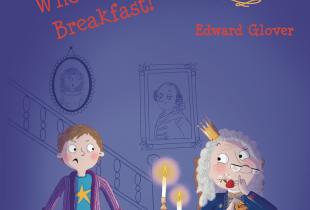 After writing six novels in six years and already with an idea for a seventh, it never crossed my mind to write a children’s story. But after a chance remark by my daughter, I decided to take a ‘time out’ and have a go.

We’ve all heard young children being urged by tedious adults to use their imagination – whether by writing a story for school homework or finding something inspiring to do other than internet games. Yet it struck me that a child might not know what imagination was – what it looked like, where to find it and, if found, what to do with it.

When my grandson, who always gets up early, came to stay with us in Norfolk one autumn half-term with several holiday homework tasks to complete, I realised I had the makings of a possible story. Particularly if I drew on some of the historical paintings in our dining room and the fact that my grandson much enjoys pain au chocolat – a treat he rarely has at home.

One evening after reading him a bedtime story, I read him a few lines which I had scribbled down earlier in the day. He smiled, made no comment, and turned out the bedside light. Despite barely a flicker of interest, I was not put off.

The story I wrote was short but, after further thought, I decided to make it longer – a story about a boy desperately in search of that elusive thing called imagination to help him with his homework. A year later the complete story was finished, had a title – The King Who Ate My Breakfast – and had been edited by my copy editor, Sue Tyley. I was delighted when Blue Falcon Publishing decided to publish it.

I still intend to write that seventh novel but, as I’ve greatly enjoyed writing The King Who Ate My Breakfast – which has helped me to see this complicated and chaotic world from a child’s perspective – I will before too long write another children’s story. I already know what it will be about.

And now for something completely different…

Having written six novels in six years (The Herzberg Trilogy, The Executioner’s House, The Lute Player, and more recently Dark Obsession), I wanted to write something entirely different before beginning another novel.

So last year – in the midst of other everyday work – I conceived and completed a children’s book for the 7-9 year age group. It’s about a young boy who encounters two figures from history and what ensues while he searches desperately for his imagination in order to complete some challenging school half-term homework.

It was fun to write – I’ve never written for children before – and it will be an absolute pleasure to have it published later this year.

But now it’s time to begin my new novel. More about that later.

In conversation with North Norfolk Living

I was delighted to be recently invited to discuss lockdown, the FCO, and my latest novel with Amanda Loose, editor of North Norfolk Living.

Her interview, The sound of silence, can be read on the magazine’s website.

Female characters in my writing

Fictional women have been the central characters in all six of my books.

First, in the Herzberg Trilogy, which spans the period from 1765 to 1918, there are three generations of musically gifted and ambitious women, crucial to what happens against the backdrop of peace and war. Then there is Karin Eilers – a young attractive German woman with a hidden past in 1945 war-torn Berlin – featured in The Executioner’s House. And the mysterious Khadra in The Lute Player, which begins in 18th century Palestine.

In the foreword to A Motif of Seasons, the last part of the Herzberg Trilogy, I wrote that I enjoyed writing about women – their fascinating interaction both with other women and with the opposite sex and the delightful complication they add to life through their presence, manifest in their gestures, their voices, their expressions and their tastes and opinions. Together with the scope that costume provides, women offer me a broader canvas on which to paint my stories.

The pleasure of writing

I still work part-time as a Director (Communication), editing a FCO-related magazine Inside Out and sit on three boards. But writing books is my greatest pleasure. The themes come easily and the words without difficulty. I write when I can – no set daily routine. And wherever I go, I carry with me a small notebook to capture – possibly for later use – sudden thoughts about storylines, snatches of overheard conversations and observations of the world around me. A sign hangs on my study door in Norfolk:

Careful, or you’ll end up in my novel

As for my next novel, let’s see what inspiration I get from the world in which the unthinkable, upheaval, has become the daily norm.

While I still get a buzz from working in London two to three days a week – with colleagues in King Charles Street at the heart of the UK’s 21st century foreign policy machine – it’s always good to return to north Norfolk for the space and opportunity to write.

I published my first novel – The Music Book – in 2014, the year I ran the London Marathon and two years after ending a full-time diplomatic career. I never intended to write more than one. I simply wanted to prove to myself that after years of Foreign Office drafting I was capable of writing something completely different. Six years later I’ve completed my sixth novel – Dark Obsession. Thus, one story each year.

And each book has strong female characters and each a musical thread.

The six comprise four genres – historical chronicle (The Herzberg Trilogy); espionage (The Executioner’s House); fantasy (The Lute Player); and now fixation (Dark Obsession). Each of the six books draws not only on my knowledge of history and but also upon my experience of human nature during my diplomatic career. Most of what you want to know about someone can be discovered through observation.

Though the latest book is set in the latter part of 19th century France and Indo-China, its tale possibly has a 21st century resonance in the age of social media, particularly its darker side.

I have recently finished my latest novel – the sixth in six years.

It’s now in the hands of my highly-professional copy editor. I hope it will be published in the latter part of April/beginning of May, to be followed shortly afterwards by my first story for children between the ages of five and seven. Once that too has been copy-edited and I have found a suitable illustrator I intend it should appear to the public in the summer.

Back to my new novel – different in genre from my previous books in The Herzberg Trilogy, and The Executioner’s House and The Lute Player.

Here is how I would describe it:

Sunday the 22nd of August 1875. I saw today an enchanting young woman on the river, bathed in golden sunlight. I cannot remove her from my mind.”

So begins the obsession of a man of wealth and influence, its darkening shadow spreading from southern France to Paris, to Cochin China and Spain, altering lives. For some it will be fatal; some will find freedom. A former detective, a society beauty, an imperial concubine, a painter, as well as the girl herself, are all subject to its thrall – and each have passions of their own. Victim or agent. Guilty or innocent. You decide.

All of my books reflect three important aspects:

As a diplomat, I was taught – amongst other things – the importance of observing (as another source of information) human nature with its lighter and often darker side, the latter often concealing secrets and destructive frailties.

From the many I’ve encountered in my long diplomatic life I have been able to assemble – by picking and mixing – a rich array of players to appear in my stories. This latest tale of obsession and the dark place to which it can often lead has enabled me to delve once more into my personal treasury of recollections of those I’ve met over the years to paint yet again the good and the bad in human behaviour.

As the sign outside my study door in Norfolk states:

Careful or
You’ll End Up in
My Novel.

Not the retiring type…

I was delighted to be interviewed recently by Amanda Loose for a piece in North Norfolk Living. The area is not only home, but also features heavily in my books, so has an extra special place in my heart.

Amanda was very interested in my background in The Foreign Office, and the inspiration that led me to write five novels in as many years.

You can read the full piece online. To write five novels in five years has been – for me – a remarkable journey of discovery. I’ve found a new and deeply rewarding profession that complements my other ongoing activities (diplomacy, the environment and the preservation of buildings in King’s Lynn of historical and architectural merit) and provides a new and refreshing means of expression after years of writing dry policy papers and briefs.

Moreover, my storytelling since 2013 has provided the opportunity to draw afresh on my memories and experiences of a deeply satisfying and varied career with the Foreign Office (pictured) and to recall observations of human nature – at its best and at its worst. In addition, each book not only has strands of history, drama and music intertwined with my love of art in all of its forms but also – just as important – strong central female characters.

And the five books have spanned three genres – historical chronicle (the Herzberg trilogy) spread over 153 years of European history ending in 1918; a modern story of betrayal in war-torn Berlin in 1946/7 against a backdrop of British and Soviet intelligence rivalry (little has changed since then); and now – in The Lute Player – fantasy and obsession.

What to write next? There’ll be a decision about that before too long…

The story behind my latest novel

My wife and I went to Jerusalem and Palestine in November 2017 as part of a study group.

In the city we saw sites familiar to many – including the Church of the Holy Sepulchre, the Golden Gate, the Garden of Gethsemane, St George’s Cathedral, the Western Wall and Yad Vashem the Holocaust Memorial. Even more special was a unique opportunity to be guided by scholars into the Dome on the Rock and the adjacent al-Aqsa Mosque. In Palestine our journey included Bethlehem (the other side of the wall of separation), Masada, Be’it Shean, Magdala, the Sea of Galilee and the Golan Heights.

The journey left a deep impression, made even more so by our remarkable and thought-provoking guide in Bethlehem – Khadra.

Back in Norfolk, the rich, evocative images and sounds of Jerusalem’s old city and the biblical sites of Palestine lingered long in my mind. They were further stirred by looking yet again at the elephants, camels and horses depicted in the background of a Dutch 16th painting in our possession featuring the Adoration of the Magi – originally part of a much larger altarpiece. The final element was to hear the melliferous sound of a lute in The Queen’s Gallery in London. Inspired, I decided to weave these three strands into a story – The Lute Player.

In one sense the story is about obsession – its impact and where it can lead. It’s also about things not always being what they seem.

And if you’ve ever wondered what a lute sounds like, wonder no more…